Denis Jabaudon, M.D., Ph.D.
Department of Basic Neurosciences, University of Geneva, Geneva, Switzerland
Department of Clinic Neurosciences, Geneva University Hospital, Geneva, Switzerland
It is an honor to receive the 2022 Altman Award in Developmental Neuroscience. I thank the Japan Neuroscience Society for having selected my application and am grateful to the past and present members of my laboratory as well as to supportive mentors and colleagues – it is a privilege to work and to have been trained in such stimulating conditions.
Over several decades of work, Dr. Altman and Dr. Bayer have laid the foundations of our understanding of when neurons are born in the brain. In addition, they have put forward a provocative hypothesis: that neurons that are born together may preferentially wire together. The mechanisms controlling neuronal connectivity should thus be sought not only in neurons themselves but also (and perhaps foremostly so) in the cells that give rise to them. The potential for a direct relationship between time of birth and connection probability is fascinating and has inspired my laboratory’s work over the years; this prize thus bears a special significance to me.
My laboratory’s research interest is in understanding how interactions between cell-intrinsic and input-dependent mechanisms control the assembly of neurons into circuits during brain development. Specifically, our work focuses on identifying gene expression programs that drive the generation and differentiation of specific subtypes of forebrain neurons and understanding how sensory experience regulates these differentiation programs. In addition to providing information on how brains come about during development and evolution, such knowledge is critical to one day harness the potential of stem cells for regenerative medicine in neurodevelopmental and even neurodegenerative disorders. I was trained as a medical doctor and practice as a neurologist; the potential translational relevance of our work thus bears a special significance to me.
Over the past ten years or so, within the frame of this research program, my laboratory has used multiple approaches to interrogate and manipulate the succession of dynamic cellular states that characterize brain development. We have typically performed this by manipulating gene expression or synaptic input and neuronal activity. Notably, we have genetically re-engineered specific neuronal circuits by reprogramming postmitotic cortical neurons in vivo (De La Rossa et al., 2013), shown that external stimuli determine neuronal diversity in select visual circuits (Golding et al., 2014) and that thalamocortical input acts to instruct the identity of their postsynaptic cortical partners during development (Pouchelon et al., 2014). Likewise, descending input onto thalamocortical neurons instructs their genetic identity (Frangeul et al., 2016). Intrinsic genetic and input-dependent processes are thus tightly intertwined during circuit assembly, such that neuroregenerative strategies will have to consider both genetic and input-dependent states to reverse engineer specific circuits.
In more recent work, we have isolated specific subtypes of neurons as they were being born and identified their developmental transcriptional programs (Telley et al., 2016; 2019). This has unveiled a previously unsuspected level of plasticity of cortical progenitors (Oberst et al., 2019) and has revealed a dynamic and plastic developmental transcriptional matrix onto which input-dependent factors can act to determine final neuronal identity (Figure). Furthermore, in line with a critical role for progenitor molecular identity in setting the properties of postmitotic neurons and the circuits they form, we have shown that in the neocortex, neuronal differentiation programs are relatively generic across cell types, while instead, radial glia identity progression is critical to determine cell fate ((Telley et al., 2016; 2019). Furthermore, once neurons are born, the fine temporal regulation of these generic transcriptional programs is critical to define cell fate, for example, in different types of interareal projection neurons (Klinger et al., 2022). Finally, beyond strictly genetic programs, bioelectrical parameters are critical to determining progenitor fate progression in the neocortex, further emphasizing the importance of crosstalks between extrinsic and intrinsic factors during development (Vitali et al., 2018).
Together, using cortical neurons and thalamocortical circuits as a proof-of-principle system, these findings illustrate how dynamic input-dependent and cell-intrinsic factors interact during circuit assembly and provide hints on how we could coax these transcriptional programs for repair purposes. Building on this foundation, my laboratory is now taking advantage of recent technologies allowing multiplex gene/circuit interrogation and manipulation with single-cell resolution in different species and in neurodevelopmental disorders to understand better how our own brains come about. I feel we are reaching a golden age for developmental neurobiology in which functional genetics may, at last, fulfill its promises. It is a privilege to be part of this vibrant community of scientists, and I look forward to new interactions with colleagues, technological breakthroughs, and scientific discoveries in the field in the years to come. 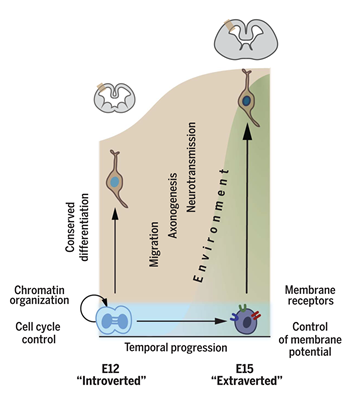