I am honored and thrilled to have recently received the 2020 Joseph Altman Award from the Japanese Neuroscience Society. I am grateful to Dr. Joseph Altman and Dr. Shirley A. Bayer who have contributed to the establishment of the award that sheds light on the field of developmental neuroscience and the committee for giving me this award.

During development, neurons are precisely connected with each other to form proper neural circuits, which are critical for the normal brain function. Since aberrant neural circuits in the brain are thought to be the cause of mental disorders such as autism and schizophrenia, developmental neuroscience is not only important for understanding how complex structures are assembled, but also for characterizing and treating them.

Our group has been working on mechanisms underlying olfactory neural circuit formation. Numerous studies demonstrate that the development of precise neural circuits is initially directed by genetic programming and subsequently refined by electrical neural activity. The most prevailing model for the activity-dependent development of neural circuits postulates the interaction between pre- and post-synaptic neurons, which refers to as Hebbian plasticity. However, the olfactory map develops even in mutant mice lacking synaptic partners, suggesting another activity-dependent mechanism for the olfactory map formation. We have recently found that olfactory sensory neurons exhibited subtype-specific temporal patterns of spontaneous activities that induced specific expression patterns of axon-sorting molecules for axon convergence. Our recent finding implies a novel form of activity-dependent mechanism in which cell-intrinsic patterned activity regulates gene expression programs for circuit refinement. In the nervous system, neural activity is involved in various aspects of brain development and function through a complex program of gene regulation. Although several hundreds of genes have been identified as activity-dependent genes, their regulatory mechanisms and functions are not fully understood. Our group continues to be engaged in understanding the mechanisms of activity-dependent olfactory circuit formation as a model. Our goal is to uncover the basic principles underlying converting electrical activity patterns into gene expression.

Finally, I would like to express my appreciation to my mentors, colleagues, and family for their great support. I couldn’t have achieved this without them. 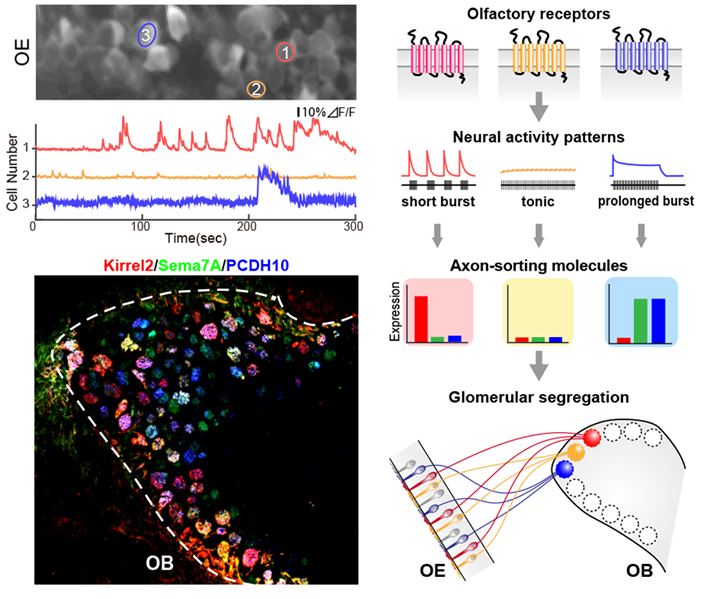