Yasunori Hayashi
The 21st Recipient of the Tokizane Prize in 2019

Words from the awardee

It is my great pleasure and honor to receive the Toshihiko Tokizane Memorial Award. Approximately 30 years ago when I was still a medical student, I read a book titled “Nou no Hanashi” (A Story on Brain, Iwanami Shoten, 1962). It triggered my interest in the mysteries of the brain, but at that time I could have never imagined that I would receive an award in memoriam of the author, Dr. Tokizane.

I have been interested in the “Molecular mechanism of hippocampal long-term potentiation” since I was a graduate student. When I entered the field, there was a great deal of confusion about the site of long-term potentiation (LTP); of whether it is pre- or postsynaptic. During the Excitatory Synapse Social at an SfN meeting, people voted for either pre or post, and I remember the vote was split about half and half. The main reason for this confusion was that the only possible approach for studying LTP at that time was to look at EPSP size by measuring the electrical response, which was then analyzed statistically. Depending on the model they used, the results and interpretations differed. This argument of pre versus post seemed endless and LTP was almost becoming a “long-term problem”, which indicates the sentiment and sense of stagnation at that time.

On the other hand, molecular biological studies revealed various molecules in the excitatory synapse. Due to these studies, the molecular identity of glutamate receptors was revealed, which had previously only been detected by electrical recording. I wanted to apply the new knowledge obtained in these studies to LTP research. To accomplish this, however, I believed that several technological developments were essential. Introducing genes into neurons using viral vectors or gene guns enabled specific manipulation of synaptic molecules. GFP and its variants, in combination with two-photon microscopy, allowed us to visualize the molecular behavior during LTP. Furthermore, Förster resonance energy transfer (FRET) could be used to capture biochemical changes, such as protein interactions and activity changes, at single synapse resolution over time.

Using these techniques, we found that the AMPA-type glutamate receptor translocates to the synapse during LTP. In addition to the receptor translocation, multiple postsynaptic molecules flow into the synapse in a specific order and, simultaneously, the dendritic spines expand. We then created a FRET sensor to monitor the polymerization state of actin and found that LTP causes a rapid shift of the F-actin / G-actin equilibrium towards F-actin. Since F-actin binds to various proteins, we proposed that it is the molecular identity of a “synaptic tag”. In addition, we have recently elucidated how transient calcium signals are converted to long-term biochemical changes, which I plan to report in the award lecture.

Since we reported the trafficking of AMPA glutamate receptors over 20 years ago, it has been well received and now even appears in high school textbooks. This research would not have been possible without my past mentors who guided me and collaborators involved in the research. Though I cannot list their names here, I would like to express my sincerest gratitude for their effort. A halfway point has already passed in my career as an independent PI. During the rest of my time, in addition to elaborating on my research, one important goal of mine is to foster the younger generation of neuroscientists. 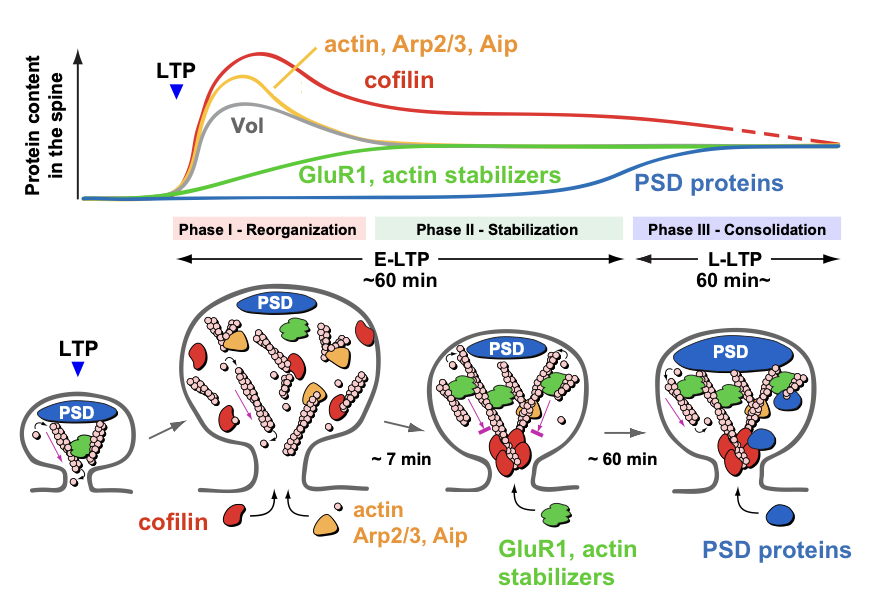 Proposed model for the reorganization of the postsynaptic components during LTP. There are at least 4 different patterns of protein dynamics (schematic evolution of the spine content of G1-4 proteins; Vol: spine volume) and 3 temporal phases (I-III). Arrow indicates actin treadmilling. 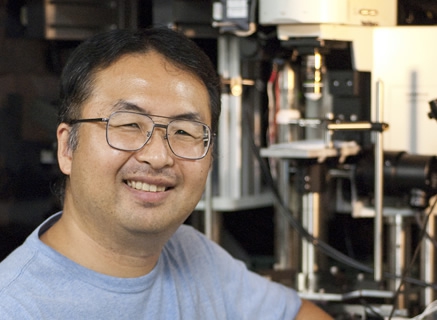