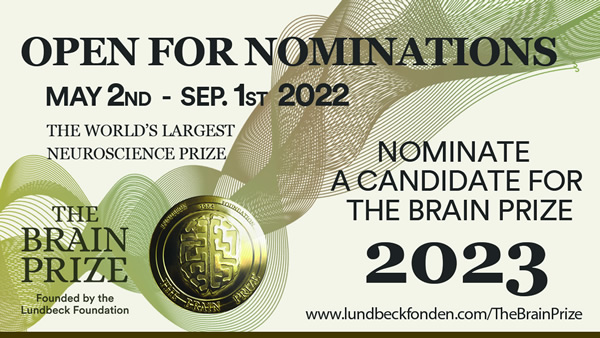 The Brain Prize is currently the world's largest prize for neuroscience and is awarded each year by the Lundbeck Foundation. The Brain Prize is awarded to one or more individuals who have distinguished themselves by making outstanding contributions in any area of neuroscience- from basic to clinical, and since it was first awarded in 2011 The Brain Prize has recognised 41 scientists from 9 different countries. You can find out more about The Brain Prize Laureates here.
Recipients of The Brain Prize can be of any nationality and work in any country, but they must still be active in research, and they must be nominated by others. Winners of The Brain Prize are chosen from the pool of nominations by The Brain Prize selection committee. Winners are announced in March each year and they are presented with their medals by His Royal Highness, The Crown Prince of Denmark at a Ceremony in Copenhagen in May or June.
The nomination window for The Brain Prize 2023 is now open and will close on 1st September 2022. Nominations can be made online here: Brain Prize nominations where you may also watch a film about the nomination and selection process.
Nominations for multiple individuals who have contributed to an achievement are strongly encouraged, and nominations of candidates from diverse backgrounds are warmly welcomed.
PAGE TOP